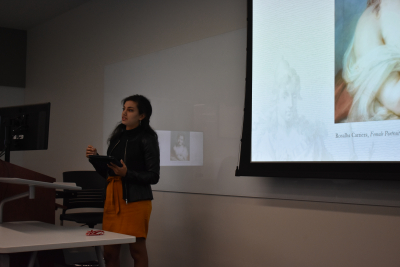 During the 2019 ACC Meeting of the Minds, Angela Tawfik  '19 presented a poster on "Senses of Venice".

Senses of Venice, an innovative and immersive exhibition at Duke University Libraries opening July 2019, brings to life the first accurate map of Venice. Produced in 1729 by the artist Ludovico Ughi, the map was sold to visitors, especially those coming to Venice as part of the Grand Tour and lavish parties of Carnival. Printed on sixteenth copper plates, the easily transportable paper sheets could be cut out following perforated lines and assembled upon arrival back home. Using this map, a small team has narrated various historical stories about eighteenth-century Venice accessible via interactive digital displays. One of these displays recounts four intriguing figures active in Venice, one of whom is Rosalba Carriera, the focus of my research and this presentation. Carriera, a Venetian artist credited with the invention of pastel portraiture, was one of a handful of female artists to be accepted to the Academie Royale in Paris in 1721. Through the sensual vibrancy of her application of color and the soft delicacy of the medium, she created a new trend for the recognition of pastel for serious portraiture, an approach that ultimately influenced the development of the fashionable Rococo style. Both the tactility of pastel’s materiality as well as its illusory nature reflect a general fascination with playful deception, no more apparent than during the season of Carnival in Venice, a moment when masks were ubiquitous and promiscuity pervaded under the guise of a religious celebration.