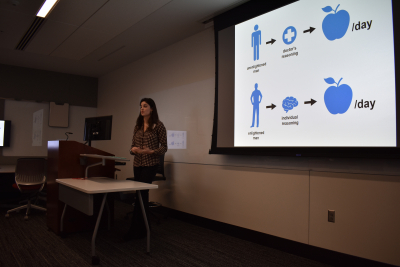 During the 2019 ACC Meeting of the Minds, Daniela Flamini '19 presented a poster on "Lessons in Journalism from Argentina: How Fact-Checking Signals the Rise of Counter-hegemonic Narratives in Truth Production."

In news environments all around the world, journalists are frazzled about what they consider to be a deplorable state of the media. With large demographics of consumers having access to digital technologies and democratized methods of story-telling via social media platforms and the Internet, fact-checking has emerged as a project to re-establish authority over who gets to produce truth in our modern world.

This qualitative, participant observation research study was conducted to explore the practice of fact-checking from a social perspective, in order to discuss it as a social phenomenon occurring amongst journalists due to their desire for control and power within the realm of news and politics. It took place over two months in Buenos Aires and Rome, the former for an immersed internship at the fact-checking organization Chequeado and the latter for the fifth annual Global Fact-Checking Summit, hosted by Poynter Institute’s International Fact-Checking Network. Additionally, the study relies on interviews conducted with seven journalists from Argentina’s most popular newspaper organizations, including Clarín, La Nación, Página 1/2, and Infobae, as well as with all of Chequeado’s fifteen staff members and fact-checker conference attendees from all over the world.

This study also discusses current events and journalistic trends in the United States and Europe, specifically the rise of social behaviors like misinformation, disinformation, fake news, and the concept of post-truth, in order to frame fact-checking as a trending solution to a global power struggle emerging in media environments from a large assortment of countries.