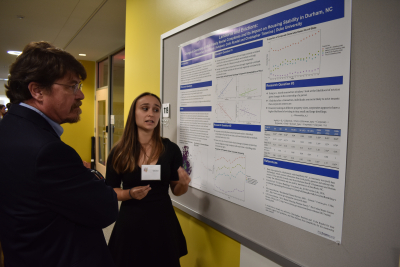 During the 2019 ACC Meeting of the Minds, Ekim Buyuk '19 presented a poster on "The Impacts of Increased Corporate Ownership of Multi-Family Rental Complexes on Housing Stability in Durham".

This report aims to uncover the systemic forces behind the displacement of tenants in Durham by investigating the differences in eviction rates filed by different types of landlords. Historically, the single-family segment of the rental market in the United States had been classified as a “real goods” market, comprised of small investors with small inventories. However, since the early 2000s, institutional investor share in all property sizes has increased dramatically. In 2013, the Blackstone Group released the first-ever rated bond backed by securitized rental payments, and since then, numerous firms, including American Homes 4 Rent, have followed with similar security offerings. Over the past decade, there has been a surge of out-of-state investment into Durham county. In that same time frame, the neighborhood has seen the displacement of hundreds of thousands of residents. Durham currently has the highest eviction filing rate among North Carolina's ten largest counties. Still, the surge of institutional investment in multi-family rental properties and its impacts have remained largely ignored in academic literature. In this report, I investigate whether the behaviors of "corporate landlords" such as private equity firms and REITs are significantly different from those of individual investors (or “mom and pop” landlords”) by analyzing their rate of eviction filings.