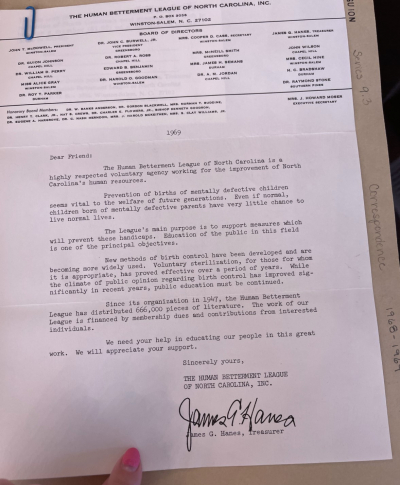 A fundraising letter from the HBLNC, dated 1969

This summer I conducted research on the Human Betterment League of North Carolina (HBLNC). This summer project serves as the foundation for my year-long thesis in the history department on this same organization. The HBLNC was an organization founded in 1947 largely by a wealthy Winston-Salem businessman, James Hanes, and Massachusetts geneticist, Clarence Gamble. In its early years, aligning with the motivation for its founding, the League sought to educate the North Carolina public and beyond on sterilization, with hopes of increasing use of the state’s sterilization law particularly as it pertained to those deemed mentally “unfit” for parenthood. Sterilization was brandished as a tool to increase the quality of North Carolina’s human resources and offered a means to better the future of the state by eliminating procreation amongst those with mental disabilities, but also those who exhibited infidelity, epilepsy and more. The organization ended in 1988 but reoriented themselves both internally and public-facing multiple times to shift their focus from sterilization to family planning to genetic counseling. Though this organization operated in the era following the “classic” eugenics period hallmarked by the end of the 19th and early 20th centuries, a eugenic impulse underlies the full span of their work. This argument serves as a foundation for my ongoing work.

Through my research, reading, and meetings with my thesis advisor, Evan Hepler-Smith, I was able to continuously refine my ideas and end the summer portion of my work with a satisfactory outline for my upcoming work. As a result, I have identified three tentative chunks of my research that will be fleshed out into separate chapters in the thesis project: 1) the underlying values of science communications, 2) women in the League, and 3 the future of North Carolina, the future of the world. Though these chapters are definitely subject to change, the research I conducted this work with support of my research grants has been invaluable in helping my project take shape and providing me the space, time, and funds to pave a very satisfactory foundation for my biggest project to date.

In chapter 1, I will focus on science communications as a way to lay important groundwork and context for the entire thesis, but also to analyze the role of language and messaging employed by HBLCN. Since the League relied largely on mailing campaigns to reach their audience and do their work, analyzing their communications is vital. Within this portion of the thesis, I will be exploring the sociocultural significance of terms employed by HBLNC and looking at their messages to see who and what is being legitimized and granted authority, along with diving into who the audience was, how the science was conveyed vs. the actual science of the time, and why this all matters.

In chapter 2, which currently stands to serve as the heart of my thesis, I will focus on the shifting role that women in the League played over time. I am specifically excited about the contributions I can make in this section of the thesis because it is largely missing from historiography that exists on HBLNC so far and deserves exploration around the post-classic eugenic period more generally. Within my objective of understanding what role women played in the organization over time, how this changed, and why, I have chosen several key women in the League to build out mini biographies for my analysis. In this chapter I will also draw broader connections to the parallel, overlapping, intersecting, and opposing feminisms, movements, groups, and women operating in this important time and space for reproductive health and science.

In chapter 3, I will assess how the League’s work existed on a local and widespread scale, alongside emerging localized and global fears around the economic stakes of population and who was allowed and desired to reproduce. Another central argument of my work that emerges in this section is that individual choice to reproduce often became a site for the alleviation of state and international anxieties through promises made on the future. In this chapter and throughout my thesis, my questions pertain to dynamics of power, money, race, physical and mental ability, class, sex, gender and more. By analyzing this white organization of professionals, I am not seeking to amplify white voices or their space in the histories we write but use this organization as a tool to understand the continuations and reintegration of harm towards marginalized peoples via manipulation of biology itself. My work connects the US south to the Global South, oppression to liberation and human rights to economics. Further, this project intertwines important narrative of the integral period between classic eugenics and the modern genetic/genomic and reproductive era, exposing the links between them we have yet to fully reckon with.