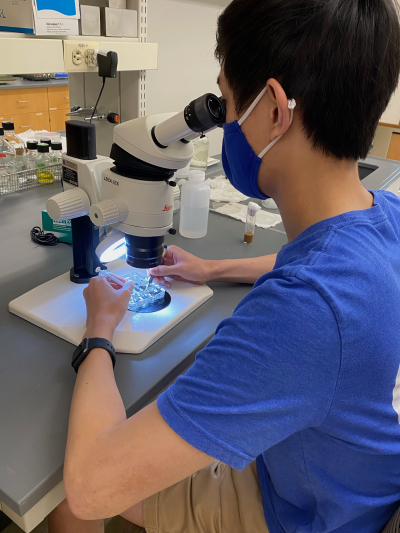 Kevin at a microscope

Wnt oncoproteins play a major role in the development of all animals. To study the signaling pathway, experiments are conducted on the Drosophila homolog, the Wingless (Wg) signaling pathway. Wg signaling can produce distinctly shaped denticles or no denticles on the ventral side of the Drosophila embryo. Repression of Shavenbaby (Svb) through Wg results in naked cuticles, but proper functioning is also dependent upon transcriptional regulation by SoxNeuro (SoxN). We are interested in determining how Wg represses these transcription factors, potentially via pair-rule genes. This is because some of the pair-rule genes show a segmental pattern of expression in mid-embryogenesis, possibly reflecting a Wg-controlled phase of expression. We expect that a mutant lacking the pair-rule repressor should not be able to shut off Svb and SoxN in response to Wg.

The pair-rule genes tested consisted of sloppy-paired, odd-skipped, and paired. Of the genes tested, only sloppy-paired partially blocked naked cuticle formation, unlike odd-skipped and paired. The denticle formation was especially apparent in the midsection of the ventral side, which was in contrast to that of the control group. Because sloppy-paired displays some ability to produce naked cuticle, we hypothesize that other pair-rule genes may promote SoxN and Svb repression. Subsequently, we will test double mutant combinations to identify other genes that play a role.

To do so, double mutants were created with sloppy-paired(slp) and paired(prd) single mutants. Two alleles of paired, prd4 and prd8, were used in addition to sloppy-paired and deficiency 7495, which has a deletion mutation at the same locus as the sloppy-paired gene. To do so, slp was crossed to prd and heterozygotes were selected from the progeny. Then, these heterozygotes were crossed to Gla/CyO to establish the curly marker. Due to meiotic recombination, the progeny will consist of double mutants with the CyO balancer and individual lines are isolated. Finally, complementation tests were performed with slp and prd to determine which lines were truly double mutants. The presence of straight winged progeny indicates that complementation occurred, meaning that the double mutant was not isolated.

Of the 31 deficiencies tested along the third chromosome, all tests yielded wild-type denticle formation and viability of progeny, thus indicating that complementation occurred and that branch and the deficiencies were on different parts of the chromosome. Deficiencies will continue to be tested in the future to determine where the branch mutation lies.