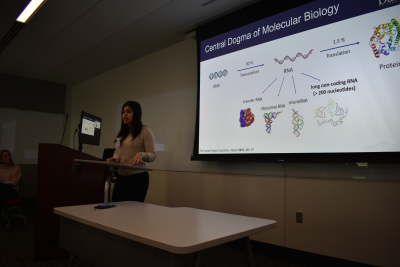 During the 2019 ACC Meeting of the Minds, Malavika Puri '19 presented a poster on "Development of a High-throughput Screen and an RNA-focused Small Molecule Library to Target the Long Noncoding RNA MALAT1".

The long noncoding RNA MALAT1 has been found to be overexpressed in many different cancers and is correlated with low survival. A region at the 3’ end of the sequence was found to allow accumulation of the transcript and contribute to cancer phenotypes of invasion, migration, and metastasis. This region is proposed to contain a triple helix expression and nuclear retention element that confers stability and protects the transcript from degradation by deadenylases. The goal of this study is to utilize unique properties of small molecules to probe the role of the triple helix stability in cancer processes. To expedite the discovery of such a small molecule, we sought to design a high-throughput screen (HTS) and concurrently design an RNA-targeted small molecule library. Towards this goal, an HTS using Differential Scanning Fluorimetry (DSF) was developed, which allows for monitoring of RNA stability changes in a 96 well plate. A screening window coefficient, the Z factor, was used to assess assay quality over three replicates and with a Z score of 0.55 ± 0.10, the screen was confirmed as suitable. Next, we performed computational analyses on an in-house ~6,000 molecule library to select for molecules with favorable RNA-binding properties. Specifically, we conducted principal moments of inertia calculations to characterize the 3D shape, and calculated 20 cheminformatic descriptors to determine the physicochemical properties of the small molecules. Nearest neighbor analysis was then used to filter for molecules that were alike to known RNA-binding chemical probes in terms of their physicochemical properties, yielding a final number of 589 molecules for screening. Ongoing efforts are currently focused on screening these small molecules in the DSF assay to identify molecules that affect the stability of the MALAT1 triple helix. These hits will then be utilized in cellular assays to measure their effects on MALAT1 accumulation and associated oncogenic processes.