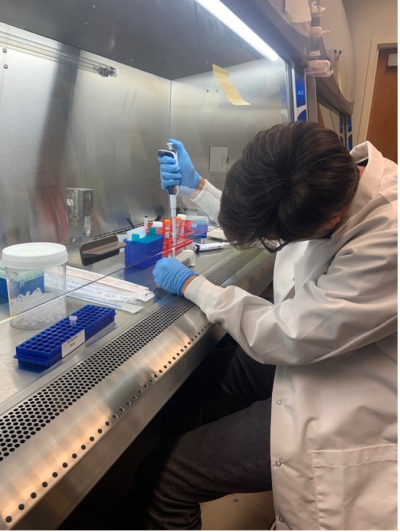 Immunotherapies utilize genetic engineering and the immune system to better combat diseases such as cancer. Clustered Regularly Interspersed Short Palindromic Repeats-deactivated Cas9 (CRISPR/dCas9) technology has revitalized interest in immunotherapy as its highly specific genetic targeting capabilities have expanded the realm of epigenetic modification in T cells.  This summer, I built upon my previous work in the Gersbach laboratory to demonstrate that dCas9 technology can be used to modify the epigenetic profile of T cells in vitro.

In the first half of the summer, I developed CRISPR/dCas9 technology to activate Basic Leucine Zipper ATF-Like Transcription Factor 3 (Batf3). Batf3 is a transcription factor that is highly expressed in the immune system and has shown to be essential to T cell development (Ataide et al., 2020). More specifically, Batf3 has proven to be essential to the CD8 T cell mediated development of memory T cells. In fact, in Batf3 deficient mice, immune function of CD8 T cells is severely reduced. In these mice, apoptosis of T cells is more frequent and the development of memory T cells to produce new T cells is stunted (Qiu et al., 2020). In short, Batf3 seems essential to the production and maintenance of a healthy population of T cells in the human immune system. Perhaps one of the most interesting features of Batf3 is the fact that overexpression of this transcription factor can trigger a transition to the memory state (Ataide et al., 2020). In the context of cancer, this transition could be extremely beneficial as it could increase the total number of T cells in serum and prevent these cells from becoming exhausted. To assess the viability of Batf3 as a CRISPR/dCas9 target, I designed eight gRNA targeting two open chromatin domains of the Batf3 promoter (Figure 1a). Subsequently, I performed molecular cloning experiments to package each gRNA into a unique CRISPR/dCas9 lentiviral backbone. I then transfected HEK293T cells to produce lentivirus, which I would then use to transduce activated CD8+ cells from three different patients. Unfortunately, I was unable to successfully yield RNA from sorted populations of CD8+ cells, so I was forced to run qPCR analysis on unsorted cells, which yielded a high degree of variance (Figure 1b). However, it appears that some functional gRNA can be identified from this experiment, namely R1g2 and R2g4. Experiments I am currently conducting will help validate the efficacy of these individual gRNA on sorted cell populations.

While experiments on Batf3 were exciting indications of the efficacy of this technology, it is still largely transient in its effect. Thus, during the second half of the summer, I designed gRNA and prepared mRNA to facilitate a CRISPRoff epigenetic silencing of FLI-1, a transcription factor and proto-oncogene. Similar to the Batf3 experiment I designed gRNA so that the CRISPRoff technology could be guided to specific sequences to be silenced. However, unlike CRISPR/dCas9, CRISPRoff introduces methylations which permanently alter the epigenetic character of the target gene. To achieve this goal, I had to create CRISPRoff mRNA that could be introduced to T cells concurrently with gRNA through electroporation. This process was somewhat arduous as DNA transcript isolation from agarose gel was extremely inefficient (Figure 2). Moreover, in vitro transcription of RNA required highly concentrated template to produce an adequate amount of RNA for mRNA production. By the end of the summer, I largely overcame most of the hurdles in mRNA production and am now running the experiment in T cells to assess the activity of the CRISPRoff system.

Thanks to DSRF funding, I was able to explore both transient and permanent examples of epigenetic repression using CRISPR/dCas9 in primary T cells. I am optimistic that my findings will help inform future scientific findings in the development of immunotherapies.