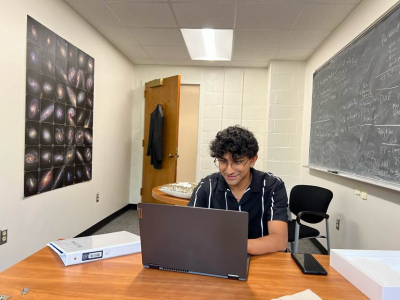 Type Ia supernovae serve as "standard candles," and allow us to measure distances; this opens routes to learning more about things such as the expansion rate of the universe, to simply understanding the size and distances between cosmological objects. Furthermore, we need a comprehensive survey done of all the detectable supernovae in our local universe in order to accurately define and study the large-scale motion, or bulk motion, of clusters of galaxies towards the outer edge of our local universe; our galaxy, the Milky Way, is one such galaxy. Currently, most of the surveyed Type Ia supernovae are from the northern hemisphere of the local universe, creating an imbalance of data and results, and so surveys of southern hemisphere supernovae have only recently begun; moreover, surveys of supernovae have never targeted a specific supercluster. The Shapley Supercluster is one of these supercluster of galaxies that defines our bulk motion, and throughout this project which I will continue on during the fall semester, I aim to survey never-before-seen supernovae from the Shapley Supercluster in an attempt to help grow our understanding of the Milky Way's bulk motion, cosmological constants, and to aid the full survey of our local universe.

This past summer, I had been analyzing positional data from galaxies in the Shapley Supercluster; I found an inner cluster of over 400 galaxies in a range under the field of view of the SkyMapper telescope in Australia, which shows very promising probabilities of multiple observations and measurements of supernovae in a time span much lower than the expected number of years it would take to discover new supernovae. To do this, the points had to be two-dimensionally binned and plotted, and the count of the number of galaxies in each "square pointing" (of 1.5° (Right Ascension) x 1.5° (Declination)) was obtained. I was then able to find the square pointing with the maximum number of galaxies. Finally, I had plotted a heat map of the concentration of galaxies to better visualize the concentration of galaxies.

The next step in my project was to analyze the redshifts of each of the square pointings and discern any possible patterns in the redshifts based on galaxy position. Having plotted the redshifts as a heat map with the higher redshifts being “hotter” areas of the Shapley Supercluster, I was able to find a pattern where the higher redshifts corresponded with the square pointings that had more galaxies in them. This correlation between the number of galaxies and a higher redshift is very interesting, and I will be looking into this relationship throughout the fall semester. Furthermore, I will be using current data on the Shapley Supercluster to reanalyze certain cosmological constants such as the Hubble constant and the dark energy constant Λ (denoted by the Greek letter capital Lambda). PhD student Maria Acevado will be aiming to procure telescope time from SkyMapper in the coming months, and will be taking data from the Shapley Supercluster based on my analysis of the cluster and its most concentrated parts. As data from the observation comes in, I will be cleaning and examining the measurements to continue the re-analysis of the cosmological constants.

My research will be a part of the WHALES (Weighing Haloes Accurately, Locally and Efficiently with Supernovae) survey and the DEBASS (Dark Energy Southern Hemisphere Survey) project. WHALES and DEBASS aims to increase the number of SNe discovered near the CMB dipole and in nearby superclusters, and by doing so, expand on the supernovae recorded and diversify the surveys themselves to mitigate the affliction of systematic errors.The long term goal, not achievable in this project due to the sheer time commitment, is to get a large scale SNe map of the local universe as surveys are currently skewed towards the northern hemisphere. Special thanks to Dr. Scolnic for guidance and help along the journey!