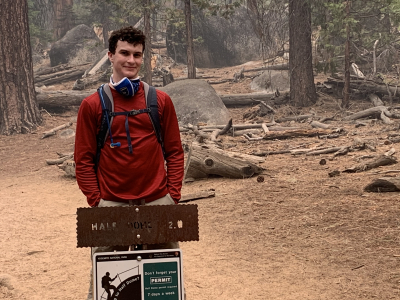 This summer, I worked in the lab of Professor Emily Derbyshire, researching the ligand-binding profile of the aryl hydrocarbon receptor (AhR) of the malaria-carrying Anopheles gambiae mosquito.  AhR, a transcription factor, has been implicated in insecticide resistance in several other insect species, namely by upregulating expression of insecticide-metabolizing cytochrome p450 enzymes, and mediates the Anopheles gambiae immune response to parasites and bacteria. Given AhR’s potential role in determining mosquito survival, my goal for the summer was to identify endogenous ligands of AhR ligand binding domain (AhR LBD).

Initially, I aimed to screen potential ligands through use of a cellular thermal shift assay (CTSA), in which protein lysates from E. coli cells heterologously expressing the A. gambiae AhR LBD were treated with potential ligands, heated across an elevated temperature gradient, and subjected to western blot analysis to quantify stable AhR LBD concentration. However, early on I noticed that western blots showed abnormally low concentrations of AhR LBD, and deduced that the protein is insoluble in standard lysis buffers when expressed in E. coli. Thus, my focus for the summer shifted to solubilizing AhR LBD such that it could be purified, and its ligand affinity assessed, later on. The AhR LBD gene was cloned, amplified, and ligated into a pMAL-c2X plasmid backbone via a Gibson Assembly. This process enabled me to add a solubility tag – the maltose binding peptide (MBP) – to the transcription factor, rendering it more soluble in standard lysis buffers. From here, I was able to confirm solubility of the protein through western blotting and isolate the protein using a low-pressure nickel-NTA purification system.

While I was not able to achieve my original goal of fully characterizing the ligand-binding affinity of the A. gambiae AhR LBD, I made substantial progress this summer in developing methods for isolating and purifying the protein for use in future assays. In my last two semesters of my undergraduate career, I will turn my attention to developing high-throughput methods for testing potential ligands for AhR LBD.

This summer was incredibly valuable for my development as a researcher. Not only did I learn and grow far more confident in my execution of standard laboratory assays and procedures, but I gained an integral understanding of and appreciation for project management and timeline development. I cannot thank Professor Derbyshire and my mentor, Dr. Jack Ganley, enough for their support, and look forward to my future work in the lab.