Smelling Fats: Addressing how the olfactory system perceives fatty acids and the role of CD36 in olfactory fatty acid detection 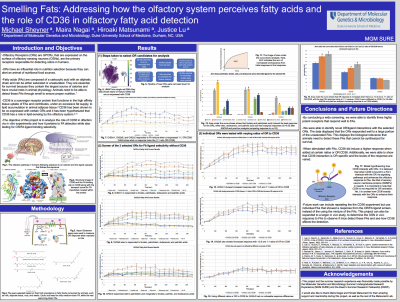 Over the summer, I spent my time in the Matsunami Lab in the Molecular Genetics and Microbiology Department at Duke University School of Medicine. The lab investigates how animals perceive and differentiate the thousands of odorants that they are exposed to every day. This analysis is primarily conducted using molecular genetics, cell biology, imaging, and behavioral approaches in mouse models.

My project during the summer addressed how animals perceive fatty acids (FA), which olfactory receptors play a role in FA detection, and how a scavenger receptor protein, CD36, plays a role in FA detection. We know that ORs have an influential role in nutrition selection because they alert animals of nutritional food sources. Additionally, FAs are essential for survival because they contain the largest source of calories and have crucial roles in animal physiology. Therefore, animals need to be able to detect these FAs through smell to ensure proper nutrition. CD36 is a scavenger receptor protein that functions in the high-affinity tissue uptake of FAs and contributes, under an excessive fat supply, to lipid accumulation in animal adipose tissue. CD36 has been shown to be co-expressed with certain ORs and it has been hypothesized that CD36 has a role in lipid-sensing by the olfactory system. The objective of this project is to analyze the role of CD36 in olfaction via in vitro experiments and how it pertains to FA detection while also testing for OR/FA ligand binding selectivity.

From previous single-cell RNA sequencing data obtained by the lab, we were able to identify 86 olfactory receptors (ORs) to be co-expressed with CD36. From the lab stock, we were able to isolate 56 of these olfactory receptors, and then conducted a primary screen of these ORs, which were co-expressed with CD36 to see which ORs responded to a mixture of 7 FAs. Vapor Glosensor Assay was used to measure OR response. 28 ORs were selected for a secondary screen using the same method. Or52m1, Or52e5, and Or52n2 were selected for further analysis because they had the highest response. I then tested the individual ORs against individual FAs to determine ligand binding selectivity, since there is little to no literature describing which ORs respond to FAs. From this, I was able to identify novel OR/ligand interactions with the selected ORs. The next step of the project was to test how various concentrations of CD36 would affect the response in the ORs when they were exposed to FAs. CD36 was added at 0:1, 0.5:1, and 1:1 ratios of CD36:OR. Once the HANA3A cells were transfected, they were exposed to the same mixture of FAs used in the primary and secondary screens. When stimulated with the FAs, CD36 did induce a higher response when added at certain ratios or OR: CD36. However, the effect was less than what was anticipated. Additionally, CD36 interactions with the ORs were specific to each OR (i.e. the response varied depending on the OR being tested).

Future work can in this area includes repeating the CD36 experiment but using individual FAs that showed a response with the ORs from the OR/FA ligand screen, instead of using the mixture of the FAs. This project can also be expanded to a larger in vivo study, to determine the olfactory sensory neuron response to FAs and see to what extent can the mice detect these FAs, while also observing how CD36 affects that detection.