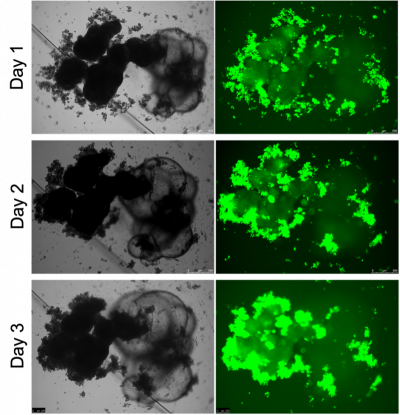 Minibrain (also known as cerebral organoids) recapitulates many features of the human brain and have been extensively used for studying brain development and modeling brain diseases, but current protocols for generating minibrains are time consuming and labor intensive, restraining the throughput of minibrain generation. In this study, we established a novel high throughput minibrain generation platform by integrating a microfluidics system into the process of organoid generation. The microfluidic machine allowed the handling of a large batch of stem cells in one run, and we were therefore able to generate thousands of minibrains in one cohort.

The ultimate goal of this study was to test the potential of this high-throughput production platform for screening drugs targeting diffuse intrinsic pontine glioma (DIPG), the deadliest brain tumor primarily affecting children. There are currently no effective treatment options available and over 90% of patients die within two years after diagnosis. One of the major challenges of developing treatment for DIPG is the lack of preclinical models because most DIPG patient-derived cancer cells are not capable of forming tumor in mouse models. In the study conducted over the summer, I did a small-scale trial with one mature batch of microfluidic-generated iPSC-derived minibrains co-cultured with patient-derived glioma cell lines. In this trial I tested three verified drugs that have been used as standard treatment options in the clinic. I used glioma cells instead of DIPG because those were readily available and had fluorescence for easy visualization. I then used fluorescence-based imaging and quantified the fluorescent signals to evaluate the tumor-cell-specific drug response.

We plan to further compare the drug responses to DIPG culture only condition and those from systems using minibrains generated from the conventional protocol in future studies. These models for comparison take more effort to generate and therefore the experiment was not finished within the timeframe of the summer. We will also conduct immunofluorescent staining on the co-culture systems to check for cell interaction markers between the cancer cells and normal organoid cells. I believe that this work has huge implication because the establishment of this high throughput minibrain production system will significantly improve efficiency of drug screening for DIPGs in an ex vivo model and provide predictive and selective power in constructing personalized cancer treatments.

Below, I am showing a picture from one co-culture experiment I did. The green dots are the cancer cells labeled with green fluorescent protein (GFP), and the patch of the solid dark shadows tethered with the cystic structures was a single brain organoid. From day 1 to day 5, we observed a clear increase in the fluorescent signal, indicating proliferation of cancer cells. We can also see the cancer cells infiltrated into the healthy organoid tissue from the peripheral and occupied large volumes of the space within the organoid on day 5. This is a direct demonstration that the co-culture system was able to foster growth of cancer cells.

I became interested in this research project because it had promising clinical applications. I have always been interested in translational research and precision medicine, and plan to pursue a PhD in this area after graduation. The drug testing platform, if developed fully, could yield new possible therapeutic options in pediatric brain cancer, and thereby improve the current standard care protocol for patients, which potentially extends their life expectancy and quality at a larger scale.