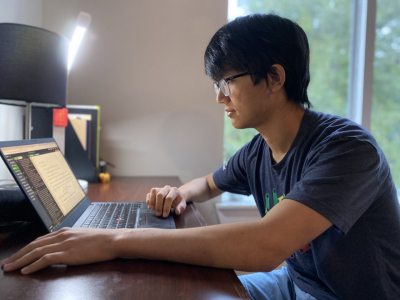 Yijia at a computer at home

In time series analysis, a central theme is to look at the characteristics of the signal in the frequency domain, which can be estimated via a suitable Fourier transform. As we typically encounter just one set of data of finite length, the estimates will not be precise, and we must find the right balance between resolution, bias, and variance of the estimates. Due to the manifestation of the Heisenberg’s uncertainty principle, it is not possible to construct a perfect estimator that can simultaneously achieve all the desirable properties.

The multitaper estimate, first introduced by David Thomsom in the 1980s, is a cornerstone of modern-day spectral analysis. The main idea is that it trades resolution for wide-band bias, while reducing the variance by taking the mean of several orthogonal estimates. It has found applications in many fields. To name two examples, medical practitioners use the multitaper estimate to study sleep by analyzing the EEG of the subjects and obtaining a classification of different types of sleep stages. In astronomy it has been helpful in the detection of gravitational waves at LIGO.

Despite the widespread applications of this method, the mathematical properties of the multitaper estimates are relatively unknown. Current mathematical justifications for the effectiveness of multitaper are based on the restrictive assumption that the time series is Gaussian. To bridge this gap, we studied the multitaper estimate under more general settings, and developed statistics that can be used for hypothesis testing in various situations. The key idea is to transfer the problem into a physical dependent framework developed by Wei-Biao Wu in 2005. This aided us in obtaining various approximations of the time series and to show central limit theorem type results that characterizes the distribution of the estimates.

Finally, we showed that a particular resampling method for the time series under bootstrap is justified, and this would be key in obtaining accurate, non-asymptotic estimates when we have a finite number of samples.