Lentiviral Delivery of Calcium and Voltage Optogenetic Indicators to hiPSC-CMs 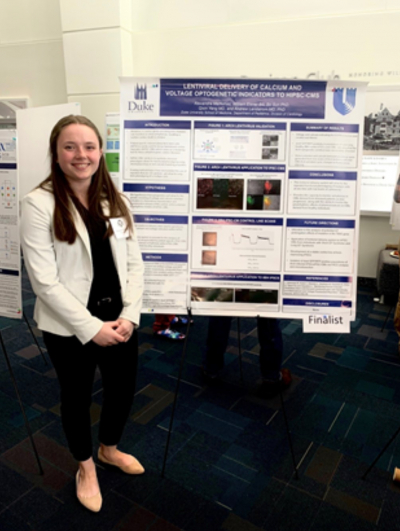 Markunas presenting at a poster session

Sudden cardiac death of children and adolescents occurs principally due to variants in genes encoding cardiac ion channels that can manifest as lethal arrhythmias. Human-induced pluripotent stem cells (hiPSCs) can be used to derive cardiac myocytes (hiPSC-CMs), which serve as a valuable tool for modeling cardiac diseases and their associated arrhythmias in vitro. We intend to incorporate voltage and calcium-sensitive indicators into the genome of hiPSC-CMs to characterize repolarization and depolarization phases of the cardiac action potential and intracellular calcium flux in arrhythmia models of hiPSC-CMs in order to elucidate mechanisms of pathology in conditions associated with sudden cardiac death. This lentiviral delivery system will allow for the repeated functional phenotyping of multiple cardiomyocytes simultaneously with low levels of cytotoxicity, providing the ability to analyze potential QT interval prolongation effects of genetic variants, such as a variant within the TBX5 gene that may contribute to development of fatal arrhythmias. We aim to develop a lentiviral delivery system to genetically encode the aforementioned optogenetic indicators within hiPSC-CMs to analyze arrhythmias recapitulated in vitro by hiPSC-CMs derived from individuals with arrhythmogenic cardiac conditions.

Two recombinant plasmids were designed and packaged in a lentiviral envelope utilizing VectorBuilder. Driven by the CMV promoter, pLV[Exp]-CMV>{ArchD95N+GCamp} codes jointly for ArchD95N, a red-shifted voltage indicator, and GCAMP5G, a GFP-fused calcium indicator. The recombinant plasmid pLV[Exp]-EF1A>{ArchD95N+GCamp} encodes the same two products but is driven by the EF1A promoter. Ostensibly healthy control line 8BH hiPSC-CMs were then transduced with one of the two optogenetic lentiviruses. GFP positivity observed through confocal microscopy post-transduction confirmed viral expression of the GCAMP5G calcium indicator amongst hiPSC-CM populations infected with each lentivirus. Calcium transient recordings were generated from line scans of lentivirus-infected CMs that exhibited cyclic changes in fluorescence intensity. Titer optimization efforts will be continued to develop stable lines of ArchD95N+GCAMP5G-expressing hiPSCs that can be readily differentiated into CMs for action potential and calcium-handling analysis. In particular, this strategy will be used to analyze potential QT interval prolongation effects of a variant in the TBX5 gene that may contribute to development of fatal arrhythmias.