The Superior Colliculus and Head-Turning Behavior 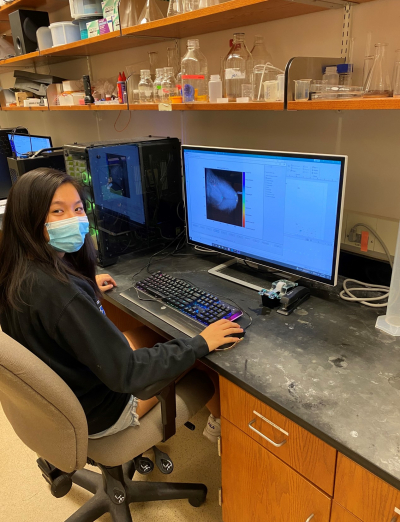 Grace working at a desktop in the lab

To quantify the turning behavior, we tracked six points: the head, right foot, left foot, chest, body, and tail base which yielded three measurements: body turn angle, neck angle, and distance traveled (mm). Body turn angle was calculated based on the angle between the chest and tail base, neck angle based on the angle between the face and chest, and distance traveled based on the difference in the animal’s starting and ending positions during stimulation. Body turn angle revealed the direction and degree of turning during forward movement, and neck angle revealed the degree to which the animal turned inward into a curled posture.

Stimulation of the PV- and VGlut2-neurons in the SC caused contraversive turning leading to changes in orientation, posture, and eye movement. I plan to continue this work at the Yin Lab in the fall by focusing on the connections between the SC, the basal ganglia, and other midbrain structures using a Cre-dependent anterograde tracing virus (AAV-DIO-GFP) and a Cre-dependent retrograde viral tracing strategy (AAV-DIO-Retro Dre). We also plan to investigate why and how the superior colliculus elicits licking during head-fixed stimulation.